How to Define your True Core Values and why they Matter

People talk about values a lot. But I think often they don’t really understand what they are and why they’re important. There may be a list of your business values up on the wall where you work. But what are they really all about?

The word value comes originally from the latin word valere, which means force. In old French it then became valoir, which means to be worth, before becoming our english word values, which we define as ‘principles or standards of behaviour; your individual and personal judgement of what is important in life.’

Your values are your internal compass. They guide every decision, every behaviour, and every action that you take. When you go against your values, you feel it in your gut. Your gut tells you that what you’ve done isn’t right (you may feel physically uncomfortable) whereas when you’re in line with your values, everything feels just right.

What are your values?

Whenever I ask this question in a group setting – a workshop, a networking event – the same two words are always trotted out – ‘honesty’ and ‘integrity’. And yes of course, you want to be honest, always, and yes, absolutely, you want to demonstrate integrity. But for me these are the most basic of values – the values that are the foundations of being a decent human being.

An architect client of mine was struggling to define what his values were. He’d trotted out honesty and integrity and then got stuck. I’d noticed though that in conversation over the two days I’d spent with him, he had said a number of times that he believed that there was always another way, another viewpoint. He told me that every time his architects were going to look at a new project, he would say to them ‘whatever your first thoughts are, remember, there’s always another way, so look for it. Look for all the options. Broaden your view.’

It was something he believed in strongly, something he lived by, a force that drove him to look at other viewpoints, other options; to expand his thinking. It was clearly one of his values. 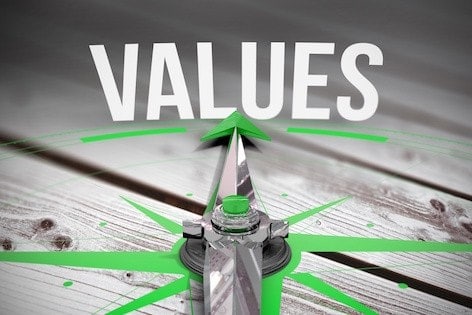 Keeping in touch with your values is a lifelong exercise.  As you move through life, your values may change. For example, when you start out, success, measured by money and status, might be a top priority. But as you get older, perhaps after you have a family, you may value work-life harmony more. When thinking about what your values are, ask yourself:   Decide what’s important to you and how you’ll demonstrate it in your business. You may genuinely believe and therefore say, one thing, but your actions and behaviours may well be saying another. Let me give you an example from a private client I worked with a while ago and the feedback I gave them, which illustrates the point. ‘You say that you want a team that takes ownership for their role and how it is performed, but your team see you needing to be consulted on every decision, and keeping tight control.’ ‘You say that you want a fast-paced organisation that grows at speed, but you over-analyse everything and take forever to make decisions.’ ‘You say that you value your people, but you cancel training sessions and team events.’ ‘You say that you value your clients and want them to have first class service – but you ignore customer feedback and seem accepting of failure to deliver on time.’ What you DO is a megaphone for what you believe in.  So what do you believe in? What would your team say you value? Your values are all about you and the personality of your business – you’re going to hire team members who share those values – you’re going to attract customers who love your values. You want these values to inspire, to attract, to hold everything together. A brand strategy business I know has the following as their values:   That’s who they are. That’s how they behave. Everything about their brand fits with these values. So? Who are you? Do one thing: Work that out. Then ask yourself, and your team, if your day to day behaviour reflects who you are and what you believe in. Thanks for reading.

PrevPreviousManagers. Do you under-estimate your influence?
NextHow to Create a Great Business CultureNext